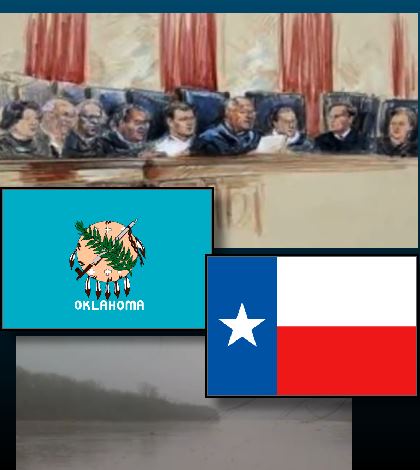 The legal battle between Oklahoma and Texas over water rights to the Red River Basin is now in the hands of the U.S. Supreme Court.  Oral argument was heard on Tuesday, April 23, 2013.

The case, Tarrant Regional Water District v. Herrmann, involves the Red River Compact between Oklahoma, Texas, Arkansas and Louisiana that divides the states’ respective water rights to the Red River and its tributaries.  Attorney Jim Milton, a water law expert, says that Oklahoma’s public ownership of surface water follows prior appropriations and riparian rights.  He says that Tarrant Regional Water District is considered a citizen of the state and thus has a claim to Red River surface water rights (see video embedded below).

National Public Radio (NPR) explains that Texas authorities believe Oklahoma has denied them access to water they have a right to under the Compact, but Oklahoma officials read the compact differently, saying they have a responsibility to protect Oklahoma’s water supply for the future.  NPR speculates that the Court’s decision could impact interstate water-sharing agreements across the country.  The Red River Compact reportedly contains boilerplate language that is used in other state-to-state water sharing agreements.

In audio obtained by The Oklahoma Network (embedded below),  Justice Ruth Bader Ginsburg did not appear to be impressed with the language of the Red River Compact, calling it “sketchy.”

“We are told that in other compacts, when they really mean to give one state the right to take another state’s water, the provision in the compact is much clearer, much more definite, than this clause.  The one that you rely on is kind of sketchy, isn’t it?  Doesn’t say how they’re going to get it, how they’re going to pay for it,” she said.  “There’s a lot to be filled in.”

Justice Samuel Alito added, “When you say Texas has the right to go into Oklahoma, just — just think about that phrase.  That’s very striking.  I mean, it sounds like they are going to send in the National Guard or the Texas Rangers.”

“No state is entitled to more than 25 percent,” Justice Stephan Breyer read from the Compact.  “…[t]hat language doesn’t say what happens if in fact there is a state that, because of cliffs or something, can’t get the 25 percent to which it is entitled.  It just doesn’t say anything about it.”

Tribal nation claims were not the focus of the Court; rather, the Red River Compact was the focus.

The Court is expected to rule on the case this summer.