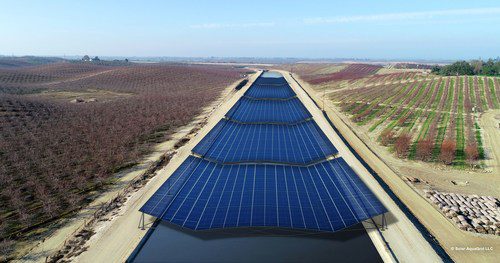 ,” a pilot project to build solar panel canopies over a portion of TID’s existing canals.

Project Nexus is a public-private-academic partnership among TID, the California Department of Water Resources (DWR), Solar AquaGrid, and the University of California and Merced.  If successful, the project could contribute to a more water resilient future for California and position the State to meet its ambitious clean energy goals.  It is the first-ever solar panel over canal development in the United States.

Project Nexus will assess the effects of placing solar panels over TID’s irrigation ditches, including:

Groundbreaking on Project Nexus is scheduled for this fall.  Project completion is expected in 2024 at multiple locations throughout the TID service territory in California’s Central Valley.  According to its press release

, the project will use existing TID infrastructure on already-disturbed land to keep costs low and efficiency high while supporting the region’s sustainable farming tradition. Additionally, energy storage will be installed to study how storage facilities can support the local electric grid when solar generation is suboptimal due to cloud cover.

The $20 million project is funded by the state of California.  It is seen as a template with potential to be replicated elsewhere in the state to help California achieve its water and energy goals.