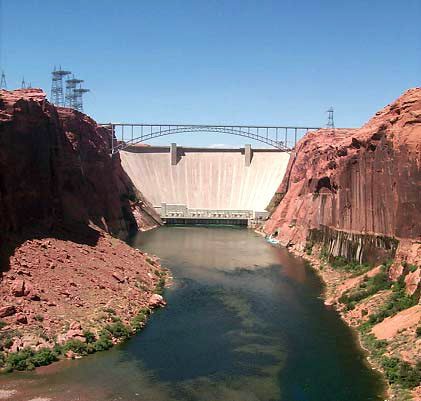 The lake is created by the Glen Canyon Dam which, according to the U.S. Bureau of Reclamation

, is “the second highest concrete-arch dam in the United States, second only to Hoover Dam which stands at 726 feet. The 26.2 million acre-feet of water storage capacity in Lake Powell, serves as a bank account of water that is drawn on in times of drought. This stored water has made it possible to successfully weather extended dry periods by sustaining the needs of cities, industries, and agriculture throughout the West.”

. “With a total capacity of 1,320 megawatts, Glen Canyon Power Plant produces around five billion kilowatt-hours of hydroelectric power annually which is distributed by the Western Area Power Administration to Wyoming, Utah, Colorado, New Mexico, Arizona, Nevada, and Nebraska. In addition, revenues from production of hydropower help fund many important environmental programs associated with Glen and Grand canyons.”  The Arizona Republic

puts the power production into perspective, writing “The dam supplies some of the power for 54 Native American tribes and for 5 million customers across the region and is important for grid stability and even restoring power to Arizona’s Palo Verde nuclear plant in the event of a grid outage.”

Tear Down the Dam?

Faced with these concerns, some opinion makers think it’s time to get rid of the Glen Canyon Dam altogether.

Gary Wockner, a contributor to Writers on the Range, writes

[I]t’s important to remember that even lower water flows are projected for the future, plus more severe heat and drought that will become the ​“new normal” for the Colorado River and the entire region. Lake Oroville, California’s second largest reservoir, now has inactive hydro turbines because there’s not enough water to turn them, its dusty lakebed a harbinger of what’s to come for Lake Powell.

Let’s also remember that Glen Canyon Dam was finished in 1963 and it and Lake Powell are only 58 years old. The region lived without them before, and it can live without them again. Now, nature is forcing our hand, telling us that it’s time to breach the dam and let the Colorado River run free.

can be viewed here