The Drought Monitor’s latest published stats reveal that 44.98% of the U.S. was in drought during the week of July 6 through July 12.

The “extreme drought” category is one of the worst drought classifications, second to “exceptional drought.”  Each of the Colorado River Basin states (Arizona, California, and Nevada in the lower basin; Colorado, New Mexico, Utah, and Wyoming in the upper basin) have areas that are in extreme drought. 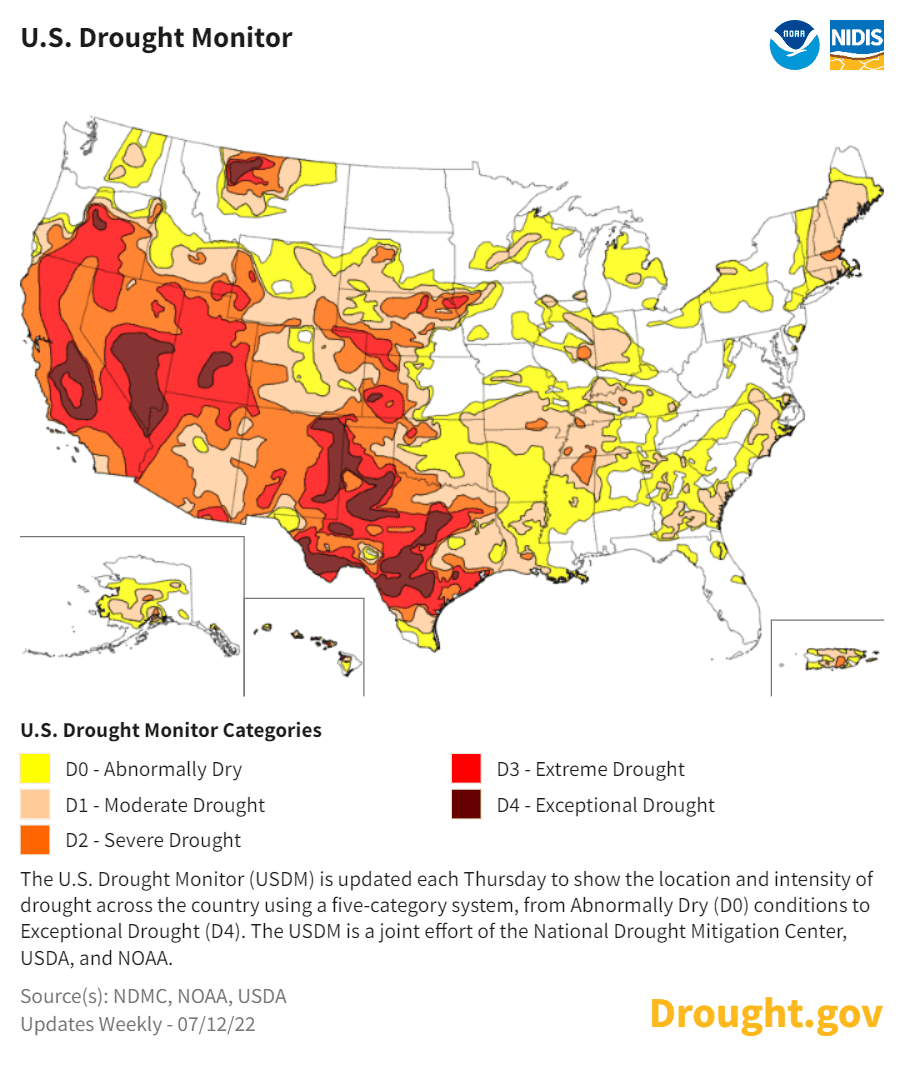 2022 Drought and Heat Webinar Scheduled for Western States on July 21.

The first webinar, held from 10 a.m. to 12 p.m. MT on July 21, will focus on the Western U.S. (Southwest, California, Pacific Northwest, Missouri River Basin, and Alaska).

The webinar will provide the latest information on current drought, heat, and fire conditions and forecasts, as well as the serious impacts to diverse sectors of the economy and communities throughout the West. Perspectives from those on the ground who are responding to these worsening drought and heat conditions will be shared.

According to the federal government, over 75% of the Western U.S. and Southern Plains are in drought, but that 75% only tells a portion of the story:

Most of the western U.S., including Southern Montana to northern Mexico and from the Pacific Ocean to the Rocky Mountains, is experiencing the region’s driest megadrought in at least 1,200 years. One of the key drivers intensifying this megadrought is climate change, as warmer temperatures are increasing evaporative demand and drying out soil and vegetation. Impacts are severe. Lakes Powell and Mead, along with the Great Salt Lake, are at record low levels; parts of California are facing unprecedented water restrictions; and New Mexico is currently dealing with the two largest wildfires in state history. As temperatures continue to rise over time, impacts are likely to worsen.

To join the virtual event, register for free at GoToWebinar.

link to Decision about Colorado River cuts likely to be painful

Against the backdrop of a megadrought, California is also facing groundwater challenges. The State's Department of Water Resources has developed an interactive map that helps members of the public...