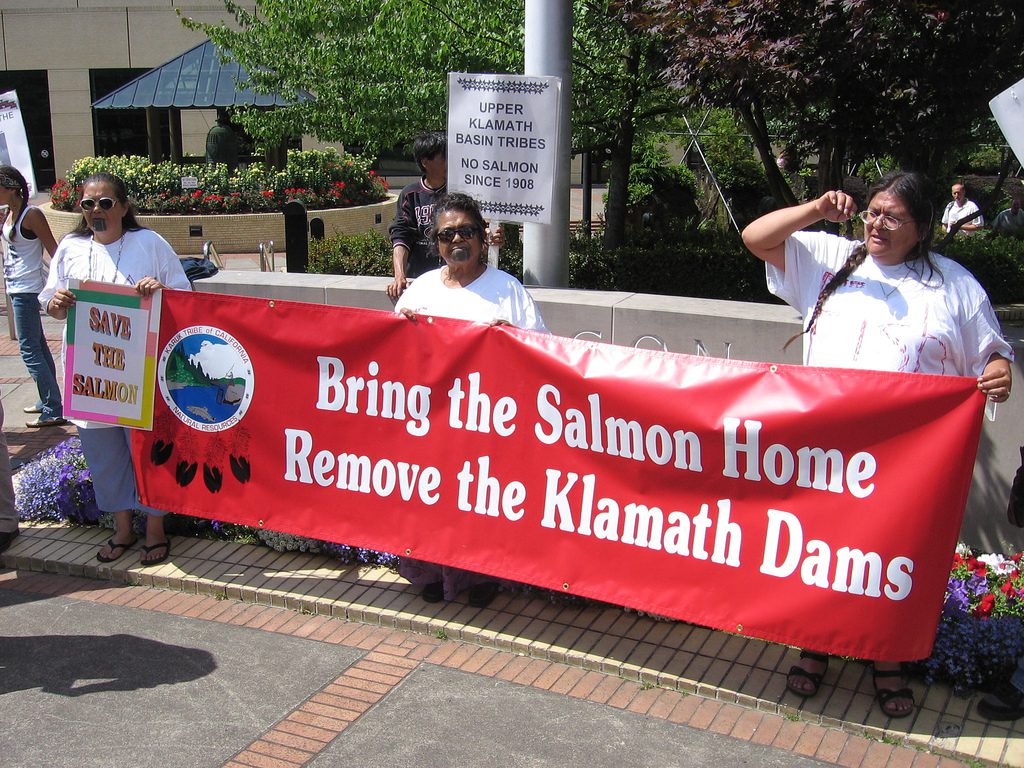 The federal government approved the regulatory framework for the removal of four dams on the Klamath system.  The dams do not provide irrigation or drinking water.  The hydropower generated is about half of what could be generated in better climate conditions.  A larger factor in the decision is the dams’ effect on the salmon population and drought.

According to Jefferson Public Radio (JPR), a service of Oregon State University, fish kills alarmed Tribal stakeholders in 2001 and 2002.  “By 2010, a diverse group of stakeholders, which included tribes, federal and state agencies, farmers, fishing groups, and conservation organizations, had signed two agreements. The first, called the Klamath Basin Renewal Agreement (KBRA), was a basin-wide blueprint for restoring habitat, establishing reliable water supplies, and spurring economic development. The second, the Klamath Hydroelectric Settlement Agreement (KHSA), laid out a path for dam removal,” writes JPR.  These agreements failed to receive necessary Congressional approval.  JPR reports that in 2016, a smaller coalition of stakeholders regrouped and decided on an alternative path to dam removal that didn’t require Congressional approval. A newly created entity called the Klamath River Renewal Corporation would take over ownership and oversee the decommissioning of the dams. The amended KHSA, which was signed in 2016, left out many of the provisions that protected agricultural producers.  Faced with the potential cost overruns associated with dam removal, the states of Oregon and California agreed to share the financial burden with Buffet’s Berkshire Hathaway, which owns PacifiCorp., a major stakeholder in the dams. The agreement was formalized in a Memorandum of Understanding in late 2020.

On November 17, the Federal Energy Regulatory Commission, or FERC, approved the surrender of PacificCorp’s license for four hydroelectric dams on the Klamath River. The order is the last major regulatory step before these dams can be decommissioned. According to JPR, this marks the start of the largest dam removal project in U.S. history.  The four dams to be decommissioned include:

“Klamath Basin Tribes and allies from the commercial fishing and conservation organizations stage a rally at the bi-annual meeting of the international hydropower industry- Hydrovision 2006. The Tribes are calling for the removal of PacifiCorp’s four Klamath River dams to help restore Klamath Salmon runs.”  Patrick McCully from Berkeley, United States, August 2006.  Wikimedia Commons.

How exciting! The dam removals will allow the fish to run again. The potential here seems amazing. This has taken a long time to get this far, I cant help but wonder how long it will be before the first dam is removed.