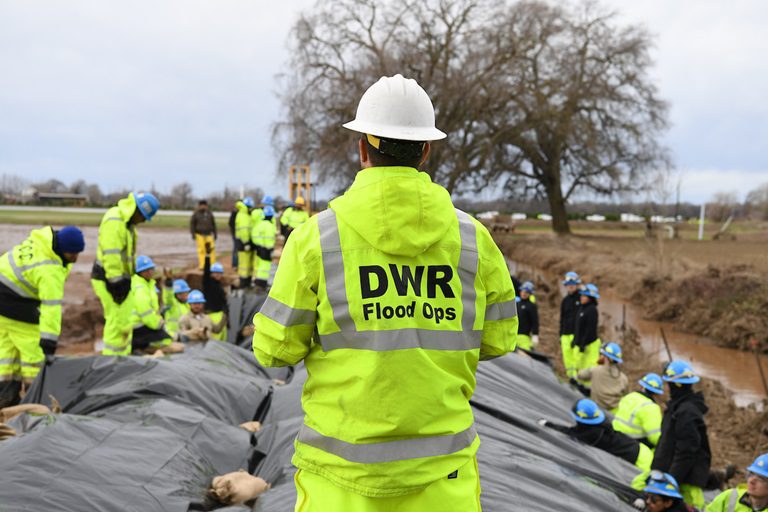 is responding to the statewide impacts from a series of severe storms that have inundated the state since late December, according to a press release issued yesterday.

More Storms and “Flood-Fight” on the Way.

The State-Federal Flood Operations Center is monitoring flood management systems pursuant to flood management needs and requirements based on forecast conditions as they develop.  For example, “flood-fight” materials and equipment have been positioned at 49 locations statewide to support state and local response. Flood-fight specialists are being deployed as needed to help local agencies assess critical locations along leveed segments of the flood control system.

“We’ll keep working with our local partners that have requested materials and crews to support their flood fights as these response efforts continue,” said Jeremy Arrich, Manager of the Department’s Division of Flood Management.

“The Cosumnes River in Sacramento County has been an area we’ve been highlighting. The flood fight measures that we put in place, working with the local partners, have held through the storms this week. We’ll continue looking at that system and monitoring how those flood fight measures are performing.”

Reservoirs Are Filling but the Drought’s Not Over.

The State Water Project is capturing as much water from the storm systems as possible while meeting environmental requirements.  The State Water Project’s largest reservoir, Lake Oroville, is now at 1.3 million acre-feet and climbing, but over 2 million more acre-feet of water is still needed to fill the lake due to the extreme drought conditions over the last few years.

“These storms have not ended the drought,” said Molly White, Water Operations Manager for the State Water Project

reports that San Francisco’s water supply, the Hetch Hetchy Reservoir, in the Sierra Nevada, is 80% full, the ground is saturated and near-record rainfall has occurred in recent days. Despite the recent weather, the drought is not over.  CalMatters

“Drought is in the eye of the beholder,” said Jeffrey Mount, senior fellow at the Public Policy Institute of California. “If you’re in San Francisco, and you rely on surface storage from Hetch Hetchy, this is great … But if you’re in a small town in the San Joaquin Valley, where massive pumping of groundwater has dried out your well, it will take successive years of rain like this to make a difference.”

Image and Source.  DWR Flood Operations during the Deer Creek Levee Repair in Sacramento County via the California Department of Water Resources