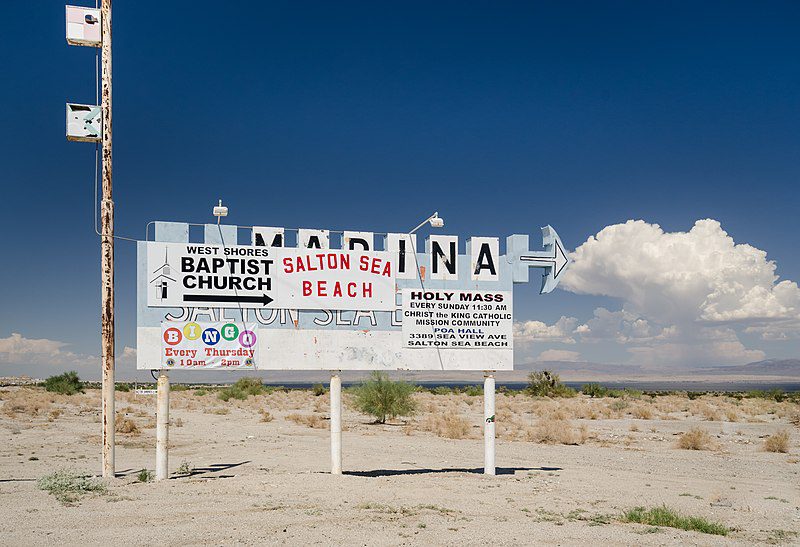 Arizona’s Senator Mark Kelly has asked the Department of Interior to withhold federal funding to California for Salton Sea drought mitigation until the state commits to additional water cuts from the Colorado River system for long-term conservation.

In an October 25, 2022 letter to Deb Haaland, Secretary of the Department of Interior, Kelly described the situation in the Colorado River basin, writing:

The Colorado River faces a projected annual shortage of 2 to 4 million acre feet of water that is shared by 40 million people across seven states. In June, the Department of the Interior asked Basin states to develop a plan to protect water elevations in Lake Mead and Lake Powell, which would ensure water availability for farmers, cities, tribes, and hydropower customers in Arizona and the West during this historic drought.

Unfortunately, four months have passed since drought discussions began and little progress has been made toward Basin-wide solutions. California, the largest water user on the Colorado River, only recently proposed to try to conserve up to nine percent of the state’s water allocation. That is not enough water to protect the Colorado River. Arizona, on the other hand, is forgoing more than 20 percent of its allocation beginning in January and is willing to conserve more. California’s offer also appears contingent on the federal government funding a state initiative to reduce dust pollution at the Salton Sea before any new conservation is guaranteed. While California relies on banking and withdrawing water credits in Lake Mead for previous conservation efforts, farmers in Yuma, who produce 80 percent of the nation’s winter vegetable crop, are willing to voluntarily conserve water and invest in more water-efficient agricultural practices.

We are out of time. The hydrology of the Colorado River is unlikely to improve next year. The longer the Department waits to press for an agreement in the Lower Basin, the more difficult this crisis will be to solve, leading only to tougher choices and litigation. During a Senate hearing on June 15, 2022, I asked Commissioner Touton if the Bureau of Reclamation would impose restrictions that preserve Arizona water allocations if an agreement was not reached. She said that Reclamation would act to protect the river, but that we weren’t at that decision point yet. In a letter to you dated August 16, 2002, I asked the Department to lay out its options and authorities for implementing mitigation measures and engaging with Mexico. Months later, as an agreement remains stalled, it’s clear that Reclamation must outline to states what steps it is willing to take and when to conserve more water.

Recognizing Arizona’s significant efforts to protect Lake Mead and Lake Powell, and the role of our farmers as a year-round source of food for our nation, I encourage the Department to outline scenarios for mandatory reductions, including accounting for evaporation losses from Colorado River contractors in California and strengthening limitations on California’s withdrawal of surplus water that it banks in Lake Mead. Additionally, I call on the Department to withhold federal funding for Salton Sea drought mitigation until California commits additional water for long-term conservation.

We all understand that this is a Basin-wide problem that requires a Basin-wide solution. Ideally, this would come through an agreement with the Upper Basin and Lower Basin states and Mexico, but if progress remains slow, the top priority must be to protect the Colorado River that is so critical to our nation’s food supply and the 40 million residents that rely on water from the river.

The Salton Sea, once a dry lakebed, was filled in the 1980s by overflow from irrigation canals flooded with Colorado River water and a busted channel that supplied the lakebed with fresh Colorao River water.  According to Grist Magazine, it has transformed “from a tourist destination to a toxic nightmare” and is expected to lose three-quarters of its volume by the end of this decade.

Wow! Powerful letter. I do not know enough about the Salton Sea situation to comment on it directly, but I think this… “Additionally, I call on the Department to withhold federal funding for Salton Sea drought mitigation until California commits additional water for long-term conservation.” clearly is the solution.