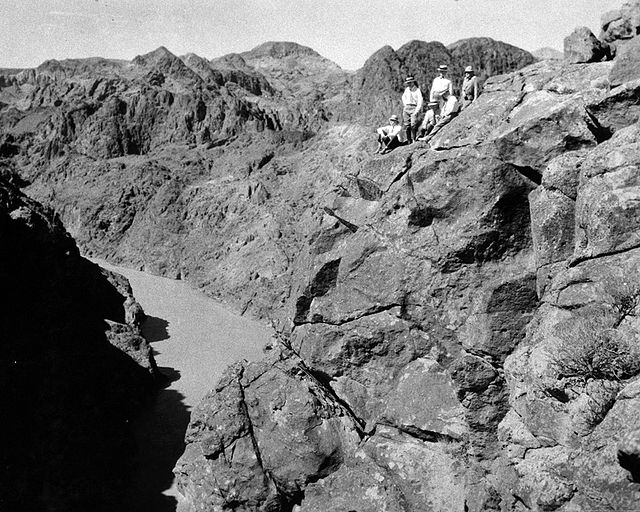 For the first time since Lake Mead and the Hoover Dam were constructed in the 1930s, the federal government has declared a water shortage that will affect the lower basin western states that are part of the Colorado River Compact.

next year.  Arizona will be hardest hit, losing 18% of its share of Colorado River water.  The loss is about 512,000 acre-feet of water.  Farmers in central Arizona will suffer the most.

Nevada will lose about 7% of its allocation, which equates to about 21,000 acre-feet.

Across the border, Mexico will lose about 80,000 acre feet.

So far, California will not face immediate water cuts because its Colorado River rights are senor to Arizona and Nevada.

The Department of Interior held a virtual press conference today (see video below) about the drought conditions for Lake Mead, Lake Powell and the Colorado River.

Tanya Trujillo, Assistant Interior Secretary for Water and Science, started the discussion by citing the studies the Department relied on, adding, “We are seeing the effects of climate change in the Colorado River Basin through extended drought, extreme temperatures, expansive wildfires and in some places, flooding and landslides.”

The Basin is experiencing its 22nd year of drought, Trujillo said.  Earlier this summer, the reservoirs hit their lowest levels since construction.

Representatives from the Arizona Department of Water Resources, the Southern Nevada Water Authority, the Colorado River Board of California and the State of Wyoming participated in the briefing.

Thomas Buschatzke, Director of the Arizona Department of Water Resources, said that the Tier 1 declaration was expected and not a surprise.  The state has a plan, he said, for at least partial mitigation to water users in Arizona impacted. Those users include central Arizona farmers, one of the state’s 22 Indian tribes and a couple cities.  Burschatzke said that what is more worrisome are July 2023 projections that the elevation of Lake Mead will go below 1030 feet.  He said that under the Drought Contingency Plan, Arizona, Nevada and California need to consult about taking additional actions to prevent Lake Mead from going below 1020 feet.  Meetings have already begun.

John Insminger from the Southern Nevada Water Authority said that the drought is serious, but Nevada had been planning for the last 20 years.  Nevada has invested heavily in infrastructure and recycling efforts, he said.  At the forefront of Nevada’s conservation efforts is its ability to sustainably recycle all indoor water use.  He said that Nevada and California have partnered to create a large scale water recycling program which would be a part of the federal infrastructure funding package.

Peter Nelson of the Colorado River Board of California acknowledged the challenges facing the Basin states and lauded the Department of Interior’s work.  He said that California is working with the states and Mexico, citing a partnership with Arizona, Nevada and California to create a regional Southern California purification center which would receive funding from the federal infrastructure bill.

The upper basin states are not facing direct cuts in 2022, but Pat Terrell, Commissioner to the Wyoming Upper Colorado River Commission, said that  Utah, New Mexico, Colorado and Wyoming are very concerned about the hydrology of the river and stressed the importance of the Drought Contingency Plan and creating long term plans.  He said that the upper basin states have felt the effect of the drought and had calls on additional releases from their storage units.