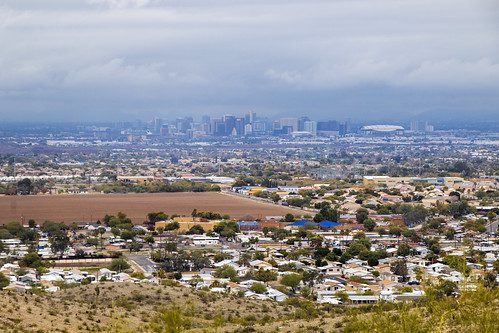 Before a development is approved in Arizona, the developer needs to demonstrate that water will be available for prospective purchasers. A certificate is issued by the State that certifies an assured or adequate water supply.  From the State’s Department of Water Resources:

The Arizona Department of Water Resources (ADWR) Assured and Adequate Water Supply programs were created to address the problem of limited groundwater supplies in Arizona. Both the Assured and Adequate Water Supply programs evaluate the availability of a 100-year water supply considering current and committed demand, as well as growth projections.

The Assured Water Supply Program operates within Arizona’s five Active Management Areas (AMAs). It is designed to sustain the state’s economic health by preserving groundwater resources and promoting long-term water supply planning. AMAs are those areas of the state where significant groundwater depletion has occurred historically and include portions of Maricopa, Pinal, Pima, Santa Cruz and Yavapai counties.

The Adequate Water Supply Program operates outside of the AMAs. It ensures that the water adequacy or inadequacy is disclosed in the public report provided to potential first purchasers and that any water supply limitations are described in promotional or advertising material. However, in a mandatory adequacy jurisdiction, adequacy of water supplies must be demonstrated prior to plat approval and issuance of a public report.

, largely in the City of Buckeye. The report had not been released during the Ducey administration.  This means that developers need to demonstrate alternative water supplies, which could be challenging given the cuts to the State’s Colorado River allocation. Some options include recycling wastewater and possible water supply from a desalination project, but the options will take time.

, is as of this writing not yet available on ADWR’s website, which has published an access page indicating that the report will soon be available.

reports that Terry Goddard, the president of the Central Arizona Water Conservation District Board of Directors, said the state’s available groundwater is enough to keep Arizona safe for a while, but acknowledged that both the Colorado River supply and groundwater supply are in trouble, suggesting that conservation and other measures need to happen soon.


Unfortunately, there is no guarantee that the strong winter precipitation will last.  Jennifer Pitt, Colorado River Director at the National Audubon Society writes

With Colorado River reservoirs two-thirds empty, federal and state water managers have sounded alarms, pointing to the risk of infrastructure failure and even the ability to deliver water and hydroelectric power to tens of millions of people. The available storage space in the reservoirs can hold more than three years of the Colorado River’s average undepleted flow. So even a bomber snow season is not going to end the drought. Tom Buschatzke, who leads the Arizona Department of Water Resources acknowledged this in a recent interview with CNN: “One good year doesn’t fix us—even a couple of good years doesn’t fix us…We’ve got to rebuild that bank account.”